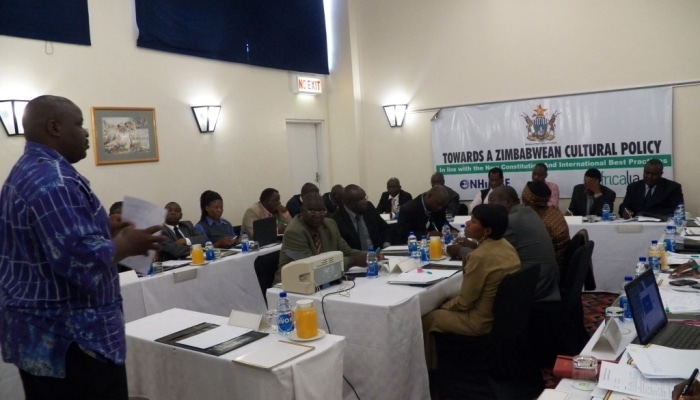 Revolutionary development organization Nhimbe Trust is at the forefront of pushing Zimbabwe’s legislative arts agenda. Funded primarily by Africalia, Nhimbe Trust is based in Bulawayo, Zimbabwe’s second largest city. The ten-year old institution is the first of its kind to articulate and lobby for a comprehensive strategy to develop Zimbabwean artists and arts resources.

The word nhimbe comes from the Zimbabwean shona language and culture. It means people coming together and working to achieve a goal. Nhimbe works together with Zimbabwean arts stakeholders and Africalia, collaborating and bringing arts practitioners together to help develop an effective arts industry. Nhimbe was founded in 2003 by former theatre practitioner Josh Nyapimbi, Nhimbe’s current Executive Director.

The idea of the Trust was born of Nyapimbi’s frustration with the inconsistencies of government-led national arts policy in Zimbabwe. Having built an impressive portfolio working with arts and civil society organizations, Nyapimbi’s tenure as Executive Director at Nhimbe has led him to focus on a strategic arts policy for Zimbabwe with Nhimbe. Nyapimbi says of Nhimbe’s work, “I feel that to address the root causes, there needs to be a lot of investment into arts education and this education needs to take place at various levels. It is unreasonable for anyone to do great things about art if they do not understand the value of art. I think there is a lot that we need to do in investing in arts education at various levels. For us, the initial entry point is to change the arts education policy at the parliamentary level”.

As a result, Nhimbe has over the years become a passionate advocate for arts programming in Zimbabwe. Nyapimbi explains, “We have presented a number of policy positions to the Zimbabwe government about art which have been considered. Some are being cited when they are making public statements on culture. We interact with parliament – the Portfolio Committee responsible for Arts and Culture and government officials from the Arts Council to the Ministry. We have direct access and interaction. And so we are able to influence at policy level with the Arts Council and with the Ministry.”

In December 2013, Nhimbe managed to accomplish what no one else has been able to achieve in the history of arts policy since Zimbabwe achieved independence in 1980. Nhimbe facilitated the first ever Legislative Arts Advocacy Workshop with the Parliamentary Portfolio Committee of the Ministry of Education, Sports, Arts and Culture in December that brought together key arts stakeholders with parliamentarians who debate and form arts policy and other relevant arts stakeholders. The workshop was the first time parliamentarians had ever met face to face with artists themselves and the first opportunity for the discussion and debate of Zimbabwe arts policy since 1980.

Nyapimbi explains, “We were advocating for a review of policies of the National Arts Council Act, The Censorship and Entertainment Control Act, and the National Gallery Act. Most of the committee attended and the government gave us a positive response saying they were going to look into those acts. There was a dialogue whereby we expressed the constraints we were facing because of these laws.”

And what has been the outcome of this workshop ? Nyapimbi says, “In fact, so far, there were not any direct changes in the Acts, but the committee have been discussing it, and we are sure we will eventually see something because we will be following up with them.”

In broader terms, the biggest outcome of the workshop was that it managed to create a practical line of communication between the creative sector and parliamentarians responsible for establishing and maintaining legislation governing the arts. This is particularly significant in the light of the new constitution enacted by Zimbabwe’s previous coalition government.” Nyapimbi is referring to the new Zimbabwean Constitution which has been lauded for being transformative in nature and crucially allows for the transformation of Zimbabwe’s social institutions into a more democratic and participatory direction.

Nhimbe has other roles, including being an important part of the Zimbabwe Theatre Association (ZiTA), a national theatre project of which it is the Secretariat. ZiTA was the brainchild of the late, revered theatre practitioner, Walter Mparutsa. It is a national theatre project focusing entirely on theatre in Zimbabwe. Workshops held in each cluster are used to help identify a promising theatre group that needs support. Last year, ZiTA supported the play Half Empty, Half Full performed by Savanna Trust at the Intwasa Festival in Bulawayo and at HIFA in Harare. Africalia each year supports several initiatives that through their various programming arms end up showing at HIFA, Zimbabwe’s biggest festival and arts showcase. All ZiTA programming takes place through the cluster coordinator – Nhimbe Trust, through funding from Africalia.

Of ZiTA, Nyapimbi says, “For now, Nhimbe is primarily an advocacy organization. Our lobby and advocacy work stands out. This is what we are known for. ZiTA is a project under Nhimbe. ZiTA is funded through Nhimbe by Africalia. Our goal is to build the institutional capacity of ZiTA. For now we are focusing ZiTA on theatre productions that will really make a mark at festivals”.

Nhimbe supports several other initiatives including the very popular SPAA programme and WiTLabs. The Schools Playwrights and Actors Academy (or SPAA as it is most commonly known), is a highly successful initiative administered by Nhimbe Trust that trains high school-aged kids in all aspects of theatre and performance. A similar programme administered by Nhimbe is WiTlabs – Women in Theatre Labs. This unique programme focuses in particular on women who want to act, write scripts, direct and produce plays.

Funding for Nhimbe’s advocacy work, SPAA, WiTlabs and ZITA comes from Africalia, the European Union through the Culture Fund and from the UNESCO Fund for Cultural Diversity. Nyapimbi says, “Our biggest challenge as an organization is finding institutional funding. Most of the lobbying that we do could go a long way in supporting staff. Administrative costs are covered by Africalia but not to sustainable levels. We just have to barely survive. And also lobbying and advocacy is a new thing for the culture sector especially in Zimbabwe. So donors at the end of the day don’t’ see the value of it and also they are quite nervous about being victimized by government for supporting stuff that is controversial. They are nervous about supporting culture in this way”.

Nhimbe has set an exciting precedent for arts policy in Zimbabwe and has created the dialogue that needs to happen between state actors and the arts industry to grow the arts and its community of practitioners. With aims to expand their reach in the future internationally, their development of young theatre practitioners and their sustained advocacy and lobbying programme, their full impact on Zimbabwean arts will be seen in time as they achieve their objectives.

Nyapimbi concurs adding, “I feel that to address the root causes, there needs to be a lot of investment into arts education and this education needs to take place at various levels. For example, these children that you see in SPAA, another is parents coming to see the SPAA kids perform and understand the value of the arts, another level is with government officials and parliamentarians. It is unreasonable for anyone to do great things about art if they do not understand the value of art." By Tawanda Mudzonga