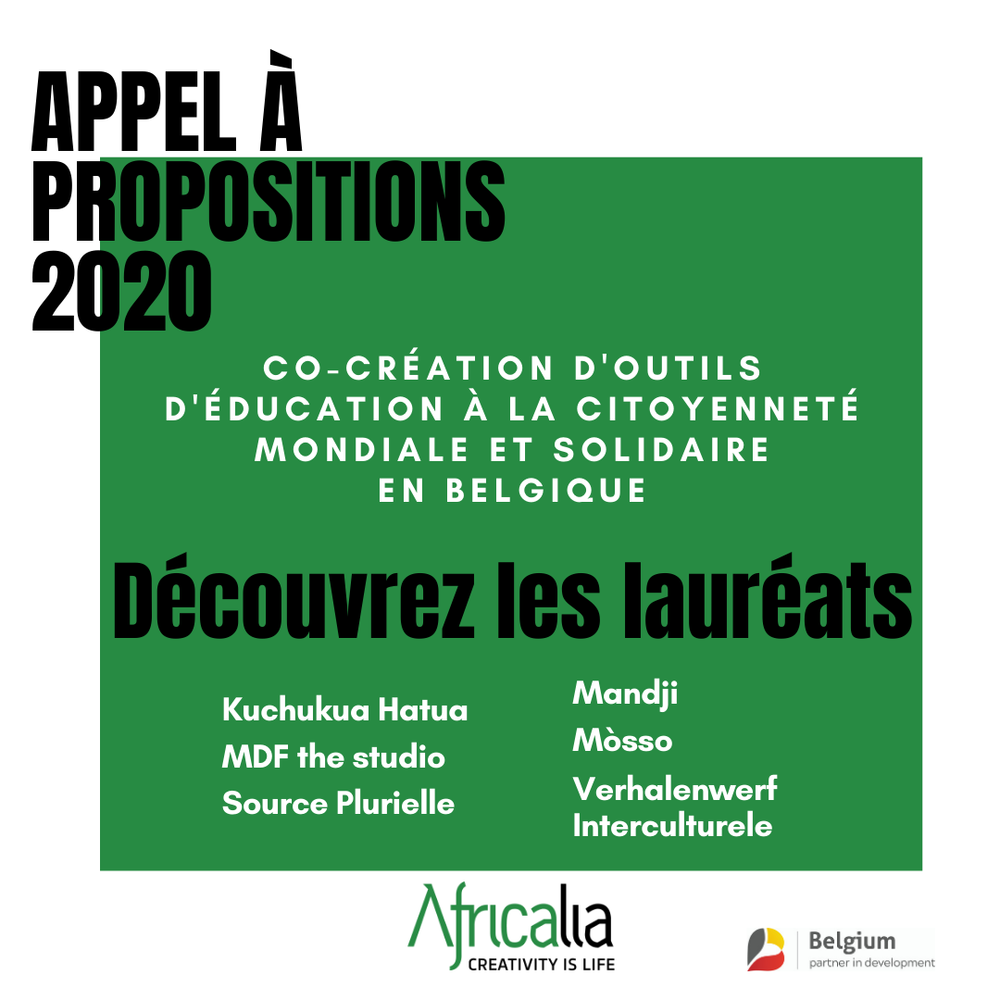 CALL TO POPOSALS IN BELGIUM 2020

The winners of the third call to proposals are revealed

There have been many applications to the 2020 Call for Proposals. The expert jury had difficulty in deciding between all the excellent proposals received. However, they had to select 6 projects to receive the third grant offered by Africalia for the co-creation of Global Citizenship Education tools in Belgium.

Find out more about the winners without further ado !

Kuchukua Hatua is a non-profit organisation that aims to promote the culture of Africa and its Diaspora and to make use of it as an awareness-raising tool.

Kuchukua Hatua brings together 7 artists to create works of art based on Aurdrey Lorde’s speech "The Erotic". These works will then be exhibited. This exhibition will work as an educational space where several workshops will be proposed. During the opening, there will be a round table on the objectification of black femininity. On the basis of this discussion, the context of the exhibition will be discussed as well as the need to address this issue. The workshops on the following days will be organised around the same topics. In our contemporary society, the black woman is still objectified and hypersexualised. This objectification not only creates stereotypes, but also makes black women more vulnerable to sexual abuse. Using art, Kuchukua Hatua maps the underlying mechanism that manifests itself in this objectification. In addition, with this exhibition, the organisation wants to honour black femininity and make it representative and inclusive. This exhibition makes room, time and space to embrace black femininity in all its complexities and dimensions.

MANDJi is a Belgian non-profit organisation that has been accompanying and supporting musical artists in Africa for 10 years through different activities such as masterclasses or workshops. It also organises cultural events in Belgium in order to allow the public and professionals from the cultural sector to discover new musical projects and new talents with a link to Africa.

"Listening to Diversity" aims to foster an awareness of the cultural mix and the apriorities that most people have about people from the African continent. To this end, singer Shama BONGO - from Congo Brazzaville - and DJ and sound composer Rokia BAMBA - from Mali - will come together to create a collection of sound tools that can be listened to by the audience through headphones. Workshops around this activity will be provided by animators and will allow the public to question themselves. It is by listening to these sound tools, by evoking to the group what they have awakened in them and by analysing, without judgement, the feedback that has been given, that the participants will be engaged in a process of reflection and social transformation.

The general topic of the proposal is a thought process on tolerance, mutual respect and the world of tomorrow. For the project leaders, it is by taking the time to take stock of what we find in what is called ’his or her Backpack of Life’, by taking the time to question the emotions that these songs, texts and sound effects provide, that each person will be able to make his or her own introspection. The workshops are aimed at adults working in teams made up of people from different cultural backgrounds and those working with/for a mixed public.

Source Plurielle is an artistic platform that offers educational and cultural support with the aim of personal development, particularly for children and adolescents. The multidisciplinary team is made up of artists, artistic animators, pedagogues and works mainly through artistic activities : performing arts, plastic arts or audiovisual.

The general topics of the project covers the historical links between Europe and Africa, past and present, and the construction of plural identities. It is mainly aimed at adolescents between 14 and 18 years old, and aims to awaken and train young people to global interdependencies and more specifically to the interdependencies between Europe and Africa, to help them better decipher these complex mechanisms (cultural, economic and historical), and to encourage them to act as responsible citizens so that they can contribute to a fairer and more sustainable world.

Mòsso is a not-for-profit organisation founded in 2014 with the aim of researching and reflecting on contemporary creation emanating from African, Caribbean, Pacific and Latin American countries, as well as developing international artistic cooperation between Europe and these countries in a sustainable manner. The aim of this organisation is to give visibility and support to emerging artists living in Belgium, to promote current cultural innovations and to carry out artistic projects on current environmental and societal challenges.

The "Sika" project, which means "gold" in the Akan languages, brings together, in addition to the non-profit organisation, the graphic designer, co-founder of the La Villa Hermosa studio and teacher at the ERG, Pierre-Philippe Ayoh Kré Duchâtelet, to create a four-issue paper edition of a journal containing photographs, texts by sociologists, anthropologists, philosophers and interventions by artists who will deal with the political, cultural and economic domination of Western countries over the countries of the Global South. Each issue will be conceived with a different editorial team composed of 3 visual and sound artists, curators and writers living in Belgium and/or on the continent. Each publication will be accompanied by a public intervention in Belgium which will be transmitted live on Mòsso’s social networks and by podcasts which will include sound pieces and interviews of the artists participating in the project. This is a curatorial space addressed to 18-35 year olds and which allows a reflection on the North-South relations of domination in a global, ethical and ecological perspective, proposing contemporary plastic and sound creations from the African diaspora, Afrodescendant.es artists and artists living on the African continent. The project also raises the question of more ecological and ethical practices. Sika encourages world citizenship by proposing a project that has the capacity to create artistic content despite the distance, closed borders and successive confinements that will still persist in 2021.

The organisation acts as a bridge between the actors of the Afro-Caribbean dance movements in Europe, Africa and the Caribbean. Its objective : to facilitate access to the source in order to improve our cultural and technical knowledge and to better promote these dances and cultures in order to avoid the appropriation of these dances and the impoverishment of cultures. MDF The Studio promotes culture in an intercultural, intersectional and decolonial perspective, through courses, workshops, conferences, cultural trips, performances and training.

Since June 2020, MDF has been bringing together Afro-descendent women twice a month to practice Afro-Caribbean dances. Following this experience, the organisation wishes to create a collective called "Sisterhood" which will bring together women lovers of Afro-Caribbean dances in order to create a show on the African dancehall heritage combining African and Caribbean dances from their different heritages. This process will result in the creation of a space where these women collectively question their experiences, share their knowledge and enrich it. It will be punctuated by the organisation of workshops led by renowned dancers from Africa and the Caribbean. The collective and the dancers and choreographers of the association will work during creative residencies with percussion musicians and a composer. The diffusion of this piece on renowned Belgian stages will help to promote the place of Afrodescendant women in our society and, more broadly, the place of their cultural heritage through dance. It will also make it possible to show the richness and complexity of these dances and music, a product of a worldwide colonial history and the impact of contemporary practices on them. MDF The Studio’s desire is thus to fight against stereotypical images of Africa and the Caribbean among the general public.

De Verhalenwerf intercultural vzw is a voluntary organisation that builds bridges between people, communities and cultures by using stories as building blocks. Its storytellers and their stories come from many different cultures and languages. According to them, stories are the world heritage, basic food and memory of humanity.

"LUISTER naar mijn STEM / ECOUTE ma VOIX" wants to give voice to Afro-Belgian storytellers and visual artists to highlight the beneficial and enriching power of intercultural exchange for society, using concrete and well-chosen examples from history and contemporary practice. De Verhalenwerf Interculturele does this in a storytelling show for all ages and with workshops on global citizenship for children and young people, the world citizens of tomorrow. These performances and workshops will be performed and accompanied by duets of a new and an old Belgian, using words and images to critically examine Belgium’s historical responsibility towards Central Africa and the indispensable process of decolonisation, with the help of stories, testimonies, letters, poems, sayings, paintings, photographs, cartoons, short films and interactive exercises and commissions. The main theme of "LUISTER naar mijn STEM / ECOUTE ma VOIX" is intercultural exchange past, present and future as a positive history and enrichment for society. Encounter, exchange, mutual understanding and respect are the key words to work together as concretely as possible, by means of good practice and interactive missions, towards a new normal and contemporary world citizenship. The project consists of a preparation and study section, the main section with narrative representation and workshops for primary and secondary schools and a final study day.